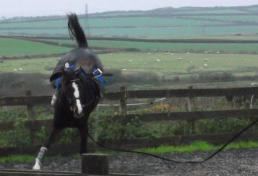 We as humans are allowed to express our feelings and emotions as and when they arise, yet horses are often discouraged from doing so.  When the horse is in the stable we expect them to be calm and pleasant. If the horse is agitated they are often reprimanded for not standing still. Getting excited or bucking playfully is discouraged. Is it any wonder that some horses become bored or withdrawn from their environment if they are never allowed to show their true feelings and emotions.

I had a horse come to me several years ago to bring on and compete after he had been ‘broken in’ by someone else first. After several weeks had gone by and the date of the horses arrival had been and gone, I decided to contact the owner. She told me they had had some problems with him and his attitude but it was all sorted and the horse would arrive the following week.

The day the lorry carrying the new horse arrived on the yard I was greeted by a tearful owner. She hadn’t seen the horse for several weeks while he was away being broken in, and on collection to bring him to me she was greeted with a skinny, depressed and scarred horse that had been broken in more ways than one. He would stand at the back of his stable, head hung low not really interested in anyone or anything. It took over 12 months for that horse to come out of his shell and enjoy life. He was sensible to ride even though he liked to be extravagant sometimes, but he had a beautiful personality, kind gentle and had forgiven enough to trust people again.

Another horse called Sonic was turned out with his friend Corelli as they were growing up for a couple of years, and when it came time to start his training he was moved to another yard. For the first week or so he was understandably not happy. The last time he had been separated like this was when he was taken from his mother, so not surprising he was upset. We gave him a new friend who was older and they got on well for the 2 years he was there. Then came his next move, to a yard of lots more horses.

The first day was a nightmare! He was rearing in the stable ( to the point where I couldn’t get out the stable door and had to escape over the wall into the next stable). I left him to get on with it for a while and eventually he settled down for the night. The separation anxiety was getting less with each move of yard and proved he was starting to cope. 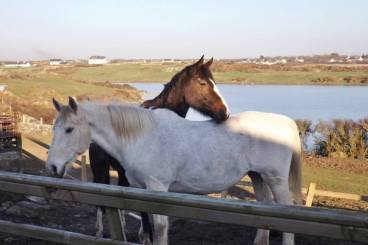 became best friends with an old mare known for being very grumpy towards other horses!. The older mare was called Tempest and as time went on Sonic was happy to leave her to go out on his own. He would call to her on his return and she would wait for him at the gate before going off together. Tempest being the old mare that she was, was not in the best of health. She had a heart murmur and huge melanomas  on her dock. We knew at some point the time would come when we would have to say goodbye to her.

I worried about Sonic’s reaction to losing another friend so took the decision that, when the time came, I would let him grieve and deal with his emotions as naturally as possible.

That day came this winter. Tempest’s melanomas had ruptured and it had put strain on her heart. Sonic knew the situation and had spent all morning with his head over into her stable with his eyes half closed and a very quiet manner. The decision was made by the vet to put her to sleep.

Tempest was led out of her stable as Sonic called to her, to an open space where she was to be put to sleep. Once she had gone, I led Sonic over to where Tempest lay. You could see the emotions running through him as he tried to understand why his nuzzle didn’t stir her nor the paw to encourage her to get up. He then moved to her head and sniffed her face and mouth. He stood still for a while and then slowly started to graze by her head.

For about two weeks he would look for her but carry on with life in a quiet way. It’s as if life is different for him now, he has grown up. Leaving the yard or other horses isn’t such an issue any more, there are always friends to come home to.

Sometimes you just have to let a horse be a horse….

One thought on “Expressing Emotions :)”

< Previous Next >
+ Add your own event Eventbrite